Historically, the best way of producing animation in terms of both creativity and hitting production quotas was to set up animation units, whereby the various members of a unit could concentrate on certain aspects of bringing a scene to life. This was how the Disney studio set up its animation teams. At its most successful, it made for a great sense of pride and security amongst the team members that they could count on one another to get the job done.

It was also a great way of having an apprenticeship program by which everyone had the opportunity of being trained to go up to the next level; or it became apparent that a person could not handle the next stage and he/she'd gone as far as ability would let them. (The fact there was studio politics that stood in the way of deserving talent does not diminish the validity of this team concept.)

Before there were animation schools, on-the-job training was the only way to learn more than just the basics (which you can teach yourself). Even today, an apprenticeship program would be the best way of developing animation talent. But that would mean a commitment by the studio to keeping its artists employed from production to production.

Work flow:
The Animator draws the rough keys and eccentric partials. These are shot for a pose test. When the pose test is okayed by the director, the scene goes to the Rough Inbetweener who rough inbetweens the entire scene for the first action pencil test.

Once the director okays the rough pencil test, the Animator may go back in and add the important lip sync (if he hasn't already included it in his rough pass). The Assistant Animator then cleans up the keys, making adjustments so that the character is on model, and checks the exposure sheets to make sure that any leveling of the figures, overlays, etc. are correct.


The Breakdown Assistant then cleans up and completes any eccentric partials and crucial inbetweens, leaving the Clean Inbetweener to finish off the rest of the drawings.

But let's not come away with the mistaken idea that working this way was a bed of roses. The pressure on the artist to produce has always been enormous. The following is a 1976 cartoon by Eric Goldberg showing a bit of foxhole humor during my last few days on Raggedy Ann and Andy. I was leaving to start my first gig as an animator at Nelvana...and there was the assumption that I would be introducing Hollywood animation production methods to that studio in the Great White North. 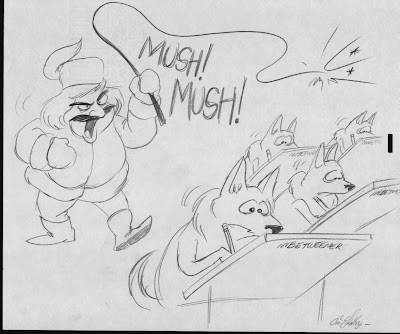 I'll use inspirational sketches to work out the basic staging for a physical gag.
Shown below is a walk-through of the ape triplets each trying to be the first to get out of an airplane. The ape triplets are very much Three Stooges-like: Larry (Algeria), Curly (Angola), and Moe (Zaire).

In order to be successful, the gag will have to rely on the animator's sense of physical timing and acting ability.
Question for you: What's the funniest gag that you have seen in animated films of the past 20 years? Was it based on personality or surprise? 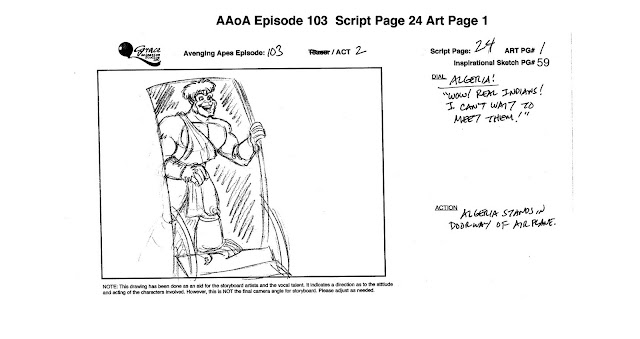 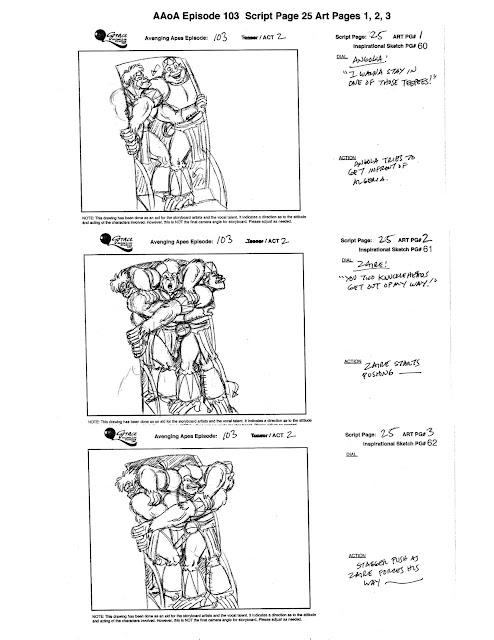 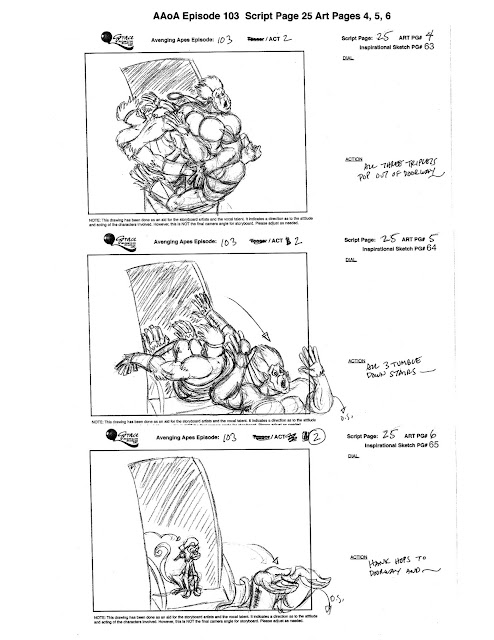 Posted by John Celestri at 2:00 PM No comments:

As a director, I like to use inspirational sketches as a way to give aid and guidance to storyboard artists. For me, the entertainment value is more about character performance than camera angles. If the storyboard artist has a better way to convey the performance and/or the camera angle, then great! We'll use that!
But I believe that an animation director should be able to at least use quick sketches to convey how he/she envisions the acting in the script. The director should give a starting point for the storyboard artist to work from...after all, the director should be the one with the overall vision for the film.
Here are some of my inspirational sketches showing the ape triplets (Algeria, Angola, and Zaire) interacting. Sometimes they fight. Sometimes they act as one.
These sketches were gathered together onto model sheets to show personality attitudes. 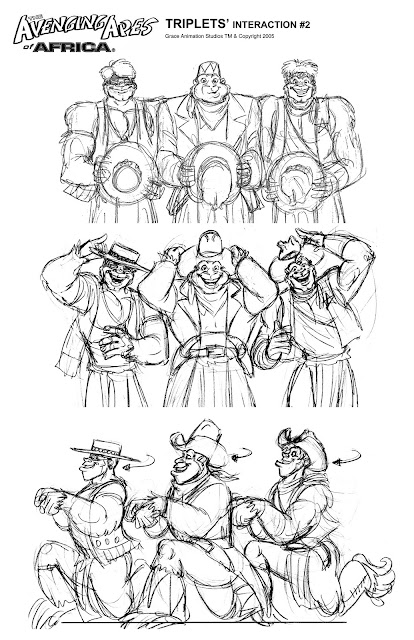 I never cease to enjoy looking at Bill Tytla's work.

Here are some rough poses of Grumpy being washed by three other Dwarfs (Bashful, Sneezy, and Sleepy). These drawings are of pure forces affecting form. The choreography of the interaction between the four characters is amazing. Study these well. This is pure animation...no Motion Capture here.


These drawings appeared in the December 1978 issue of CARTOONIST PROfiles as illustrations for Grim Natwick's article about Bill Tytla, who had passed away ten years earlier on December 29, 1968 at the age of 64.

The Difference Between Being Influenced By and Copying Someone Else's Work

No artist develops in a vacuum. From the moment we open our eyes, we are affected by what we see and feel. Some things attract us in a pleasing way, while others repel us. It is natural for us to want to grow close to and possess that which pleases us. As artists learning to crawl creatively, we naturally copy the work of those we like. Copying another artist's work develops your hand and eye coordination, which (in traditional 2D animation) is essential in being able to understand how to follow a character model sheet and keep your poses "on model".

The danger is that sometimes copying becomes a crutch which some young artists never throw down...and that cripples your creative growth.

Study the why's and how's of your favorite artist's work. Imitate that artist as a young bird would imitate its parents' flapping of their wings... but learn those lessons and principles that make for pleasing design, so that you can soar on your own into new territories...and not trudge along the well worn paths that were created in the past.

Email ThisBlogThis!Share to TwitterShare to FacebookShare to Pinterest
Labels: drawing

Here are some rough poses of Dopey slapping water out of his ear. These are drawings of pure forces affecting form. Based on frame by frame study of the finished scene, this is a cycle where the last drawing hooks up to the first with 3 inbetweens.


These drawings appeared in the August 1970 issue of CARTOONIST PROfiles as illustrations for I. Klein's article about his friend Bill Tytla, who had passed away on December 29, 1968 at the age of 64.

Motion Capture Is NOT Animation

Calling the process of Motion Capture "animation" is like calling tracing a photograph onto a sheet of paper "freehand drawing."

Using Motion Capture (or Performance Capture) is basically 21st Century rotoscoping. I don't call this animating...it's special effects. The process of taking the movement of a live actor's performance and transferring it to a design created in computer, is basically no different than encasing something that already has been recorded with a layer of effects to enhance its appearance.
Animation is feeling the movement within one's self and imparting it to a design through your pencil, stylus, or fingers.
Motion Capture is just a new form of tracing...on film instead of on paper. Yes, the technician layering a graphic design over the frames of Motion Capture has to manipulate the design at times...but that is the same as adding an effect, not creating the performance from scratch.
Animating is creating from scratch the physical performance one sees on the screen. Just as a live actor does, an animator feels the emotion within him/herself, then projects those feelings as a performance on paper or the computer screen.
Okay, I open the floor to you for your comments.
Posted by John Celestri at 9:42 AM 30 comments:

Here is an example of how I will do a basic run though of a scene between two characters.

This is from "The Devil and Daniel Mouse" (1977-78). Jan (the female mouse) is dejected and saying, "Maybe we just better quit," as Dan walks alongside her, switching his guitar case from one hand to the other.

Thumbnailing a scene like this is more than thinking about the posing, it involves how to think through the characters' particular timing so that they have a different energy, even if only slightly so. Being able to see the timing charts alongside each other is like seeing the music bars for two different instruments that are playing the same piece of music, but are accompanying each other, not playing the same notes with the same emphasis. 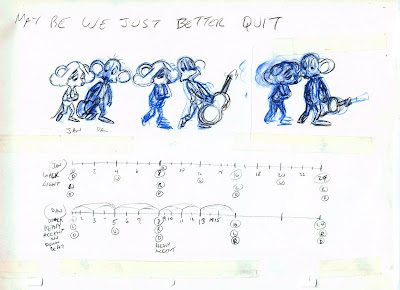 How Long Does It Take To Finish A Clean Up? #2

I ended my previous post on this subject with the statement: "As long as animation is treated purely as a manufactured product, the art of animation will never develop past what it has been in the past."

The critical word in that statement is "purely". Of course animated films in essence are manufactured in that thousands of images have to be created and linked together to form the final piece, product, or however you want to describe it. To me, what kills the art is treating each drawing as "piece work".

I know that a certain amount of work needs to be done each week in order to make a deadline. What I object to is the attitude of "Let's set the budget of this project as cheaply as we can and beat the drawings out of everyone."

An example of a manufacturing attitude: Stories are boarded as though everything can be animated fully, and then toss the burden onto the contracting studios to "make it work."

I learned very early on: Don't treat each scene as though it was equal to another...there are "money" scenes and there are scenes that can be done cheaply. Put the effort (money) where necessary and balance it out with easy scenes. I learned this from animators like Johnny Gentilella and Marty Taras (who were veteran Fleischer/Paramount/Terrytoons animators).


When I first started in the animation industry, I quickly became an assistant animator doing clean-up on "Tubby the Tuba". There I was assigned a mix of hard and easy scenes so that I could hit my weekly footage quotas. Even though I was on a salary, we still needed to keep one eye on completing a minimum amount of work each week. I have used that basic formula in everything I've done in my animation career (which hasn't ended).

The Joker Running Away In Perspective

Animating a figure moving away from camera into the distance is not as easy as it looks.

Here are the drawings, rough background, and x-sheet for the Joker running away in perspective. The final color version in the commercial was tilted counterclockwise approximately 15 to 20%. It was also a little shorter at the end, cutting just before the Joker lands after he clicks his heels. (see the Joker commercial clip in my post from Saturday, July 30, 2011 "Batman Zellers Commercial Series")

Study the x-sheet. You'll note that the original timing had the Joker taking 8 frame running steps. However, that was too slow and the Joker could not possibly cover much distance at that jogging speed for the time allotted in the scene. So, I animated him running at twice that speed (4 frame steps).


Note that I originally timed him to kick his heels together on drawing 40 & 41. I changed that in the animation to heels clicking together on drawing 38 and seeing him "float" in the air with drawings 39 to 44. The heel clicking is a passing "squash" into the "stretching" of the legs apart for 6 frames, which is what sells the action.


You will see how the action will feel different with these varied timings. How you expose the drawings will have a subtle but definite effect on the scene.